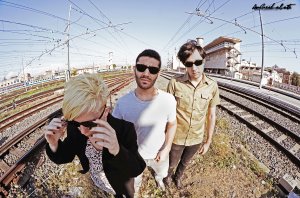 Betty Poison are powerful, sensual and violent.  They released two albums, “Poison for you” and “Beauty is over” and  constantly play in Europe and United States. Four songs were distributed by 20th Century Fox, another one was in the soundtrack for a performance by Anton Perich, long time photographer for Andy Wharol.
– www.bettypoison.com

Spiral 69 is the new / dark wave /pop by Riccardo Sabetti (ex Argine). “No paint on the wall” (Megasound/Warner/Zebralution) is the band second album after almost two years since “A Filthy Lesson for lovers” (2009). Noted by critics and with excellent reviews,  Spiral 69 features guests such as Steve Hewitt (Placebo), Tying Tiffany, Simone Salvatori (Spiritual Front) and Edo Notarloberti (Ashram/Argine).
– www.soundcloud.com/spiral69